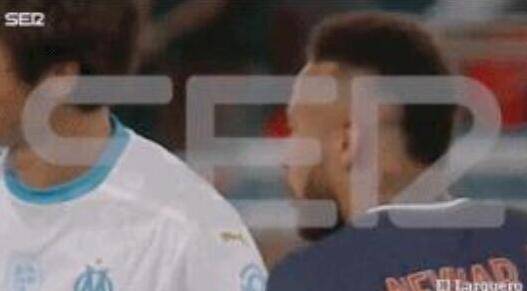 Half a month ago, Paris lost 0-1 to Marseille in Ligue 1. Neymar was sent off before the end of the game for punching Alvaro in the back of the head. After the game, he claimed that he had been racist by Alvaro. Marseille denied that Alvaro had racially discriminated against Neymar and counter-sued Neymar's racially discriminatory remarks against Japanese midfielder Hiroki Sakai. When insulting Sakai Hiroki, Neymar was suspected of insulting China. Nowadays, Radio Serre has exposed the video of Neymar insulting China, and the Brazilians "have nothing to wash" this time.

After an unsuccessful attack, Neymar walked slowly towards his own half. Sakai Hiroki smiled and said something to Neymar, but Neymar then lost control of his emotions. Neymar said to the Japanese defender, "Go away," and then scolded two consecutive "CTM Chinese". A few seconds later, Neymar said to Sakai Hiroki again, "Go away," and then scolded "CTM's Ligue 1". Neymar has always believed that he was treated unfairly in Ligue 1. The referee ignored his complaints of racial discrimination against Alvaro, and often indulged his opponents to intentionally hurt himself.

The video of Neymar insulting China was exposed, and the Brazilians were in big trouble. "Aspen" previously pointed out that if Neymar was charged with insulting China, he would be suspended for up to 10 games. Neymar also blurted out homophobic remarks when confronted with Alvaro. If Neymar is found to discriminate against homosexuality, he will be suspended for up to 10 games. Up to 20 games ban? This means that Neymar will not be able to return in Ligue 1 until Valentine's Day next year.